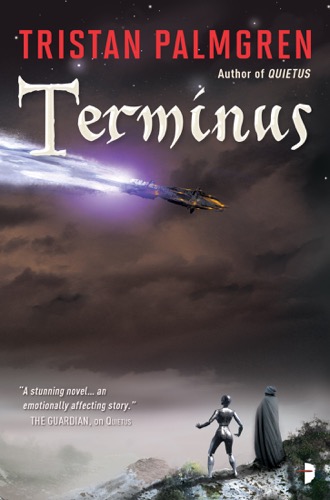 Note: I received an Advance Reading Copy of this book through NetGalley for an honest review.

In a previous life I studied Medieval History. While I don’t study it/work in the field, it is still my favorite historical period. Besides that, when I read, I read mostly science fiction (with some fantasy, horror and “general fiction” thrown in). So when I saw The Unity series by Tristan Palmgren about first contact in Medieval Italy, how could I resist?

I read the first part, Quietus, a little while ago, which set the scene. We have The Unity, an intergalactic transdimensional empire run by AI-clusters “living” on planarships capable of opening routes between planes. Humanity, spread out over planets, planes and ships works for and with these AI’s. However, The Unity was forcibly dissolved under threat of a different being, which used a plague to threaten the human population of The Unity. All this unfolded with planarship Ways and Means hovering over Earth in the Fourteenth century. Earth that is battling the Black Death, its own plague. Why was Ways and Means there? What was the assignment of the few humans brought to Earth by the ship? And what is Ways and Means going to do now that it’s effectively exiled near this Earth, unable to leave this plane?

In Terminus this story unfolds further. We are reunited with some characters from the first book, and meet some new ones. It is thirty years after Quietus and Ways and Means cured the plague. But that still leaves humanity on Earth to deal with the aftermath. It still feels like apocalypse has come. We follow Fiametta, a human woman from Earth who works herself from orphan in a monastery up to leader of her own company of mercenaries. We are also reunited with Meloku, who is remorseful about her actions in the previous book, and Osia, who is on Earth, trying to stay away Ways and Means, whose crew is blaming her for the break-up of The Unity. Meloku and Osia are the only two human crew-members on Ways and Means.

Anyway, Fiametta is being led by a voice, and financed from the East. Meloku figures out something is happening under her nose when she figures out that her observations are wrong. And Osia notices her crew, created for her by Ways and Means based mainly on fictional characters, is acting strange. What follows is a race to figure out just what is going on in the East, who is manipulating who, and more importantly, why. It’s clear that the people from The Unity and the Medieval humans from Earth are not done with each other just yet.

I enjoyed Terminus even more than I did Quietus. Quietus took a bit too long sometimes to set the scene, and Terminus also had more SF elements. I also liked the mystery of who was manipulating events and how, and why. Just like with Quietus, if you like Medieval history, first contact (but not like you know it) and science fiction, The Unity series is for you. Four out of five stars from me.