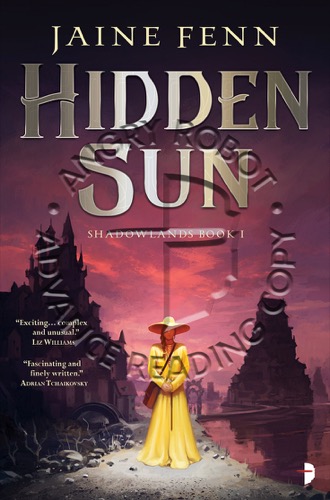 Note: I received an Advance Reading Copy of this book through NetGalley for an honest review.

My favorite genre is science fiction, even though I started out loving fantasy twenty years ago when I started developing my own tastes. I have always read some fantasy, mainly those works described as the best in the genre, or works that are some sort of crossover (like post-apocalyptic novels were old technology/knowledge is magic). Anyway, when Hidden Sun by Jaine Fenn, published by Angry Robot, came up for review on NetGalley I was intrigued by the description of a noblewoman scientist on a quest in the skyland. Fenn describes it as science-fantasy, and while I like a bit more science in this mix, at least there was some science and technology to be found in Hidden Sun.

Rhia Harlyn is that noblewoman. Her mother died giving birth to her brother, and after her father, a natural enquirer died, she took up his research, even though it isn’t proper for a woman. This has brought her trouble in the past, as she doesn’t want to marry, afraid her husband might forbid her research. Her brother is the head of the family, but she’s the older and wiser one. One night, after another fight with her brother about his drinking, drug use and general unwillingness to take his role seriously, he disappears. Months later she joins the search party for him to a rival city, travelling by caravan from one Shadowland to another. This caravan crosses the Skyland, a place where the sun is so bright, the life so hostile, that Shadowlanders cannot live there. The Skylanders escort the caravan. Skylanders are humans, but after being raised in a crèche in the Shadowland, they return to the Skyland to be bonded with an animus. In this story we meet Rhia, the noblewoman from the Shadowland, Dej is a Skyland youth in a crèche, and Sakhat is a priest in another Shadowland-city preforming some kind of experiment.

As my attempt at a short summary shows, there is a quite a bit of world-building in this book. It is already planned to be the first part in a series, and it shows. A lot of groundwork is done by describing the world, the politics, the traditions, the people and the characters. The stories of each characters feel like a long prologue to establish them, with a short bit of action in the last quarter of the book. The character of Rhia is the main character, and while the other stories do influence hers, they do seem to be there sometimes just to provide a bit of backstory or world-building. I too have read the scathing one-star review on Goodreads, discussing the three rape-ish scenes in the book. They felt unnecessary to me too, although I wasn’t that upset or triggered by them. They just felt out of place, and I do wonder if there wasn’t any other way to influence the characters.

I liked the world Fenn created, I am intrigued by the whole Shadowland/Skyland setup. I did feel that some elements, like Rhia’s scientific discoveries didn’t have much to do with this story, and are probably (hopefully) a start on something for the next novel. The story itself… I don’t know. Like I said, it shows to be part one in a series, and that takes away some of the story on its own. Still, an interesting world, and a good tale, so four out of five stars from me.