The Wrong Stars by Tim Pratt 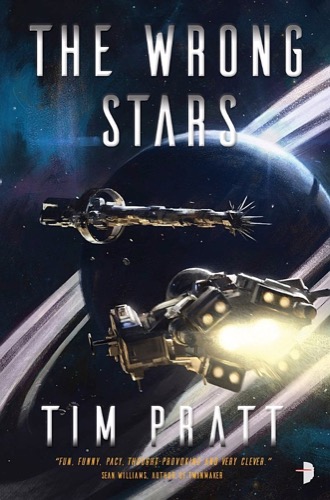 I’m a sucker for books (some might say I am a hoarder, I say I am a collector) and with such a big appetite I always am on the lookout for a good deal. Earlier this year the great publisher Angry Robot had a good deal on some of their books, one of which was The Wrong Stars by Tim Pratt. I hadn’t heard of it, but by reading the description it seemed like something I’d like. Ancient (hidden, unknown) aliens, travel between the stars, history… That’s my cup of tea. When I had the change to pick up part two in the Axiom series as an advanced reader copy from NetGalley I knew it was fate.

The crew of the White Raven, led by Callie, the captain, finds a goldilocks ship at the edge of our system, near Neptune. A goldilocks ship sent away 500 years ago from earth to a possibly habitable planet to colonize. First question, what is it doing back so soon? These ships didn’t use wormholes to travel to far-away galaxies in 21 seconds. Second, what happened to the rest of the crew? Only Xenobiologist Elena is still on board, in cryo-sleep. Third, why do the only aliens the humans know, the Liars, run away when Callie shows them the alien (presumably Liar) artifact found on board? What follows is a great adventure discovering what happened to Elena, the rest of the crew she was travelling with, and what implications this all has on the future of humanity and the Liars.

Let me start by saying this is a very enjoyable and fun space opera. It is part of a (projected) series of three, but can well be read on its own. Other than that it has some of the factors we see more and more in SF (probably in other genres too, but I am an SF-nerd), which is diverse characters. Women, queer, any type of sexual (a-, demi-, bi-). Aliens. Augmented or otherwise not quite standard humans. Even in the character of Lantern the Liar I see the diverse characteristics. Pratt does this very well I think, and makes it a “normal” part of the story. These characters are who they are, and the story isn’t about their characteristics, it’s about this alien mystery. The mystery of Elena’s crew and what they found is a very nice one, with implications of galactic history going back so much further than we can ever dare to imagine. That’s one aspect of SF that I love, so Pratt won me over there. The characters are likeable, but realistic. The interaction between humans and alien (the Liars) is done very well. I’d recommend this book to anyone looking for a fun space adventure, four out of five stars.