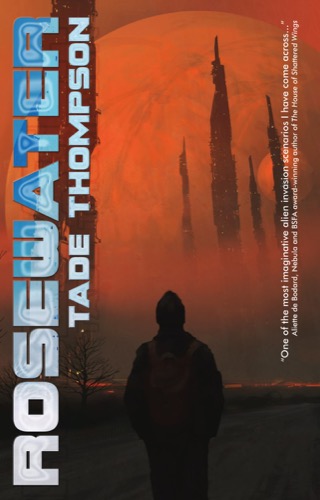 My reasons for reading this book are pretty shallow. I won this book in the Early Reviewer program of LibraryThing back in 2016, but life got in the way and I didn’t read it back then (tisk, tisk). But a little while ago I heard that Rosewater by Tade Thompson had won the The Ilube Nommo Award for Best Speculative Fiction Novel by an African. Couple that with my resolution to read more POC fiction, and I just had to read this book.

Rosewater is a newish town in Nigeria, founded around the biodome that an alien presence has erected a decade or so ago. That alien presence landed in London and is now all over (and under the earth). With his arrival, and that of several other alien entities, the xenosphere was created. Through the xenosphere, certain types of humans (known as sensitives) can read and influence minds. Kaaro is such a sensitive, a very good one. He works at a bank (monitoring and scrambling the minds of sensitives out to rob the bank) but is actually working for a secretive agency known as S45. For S45 he finds people, and does all kinds of other odd jobs, not all voluntary. The book describes the ‘current’ day (2066), but also how Kaaro got to be in S45 back in 2055, and his early life and discovery of his talents. And then, in 2066, the sensitives around Kaaro get sick and start dying, and for all intents and purposes, it seems he will be next.

I have to be honest. Back in 2016, when I requested and received this book, my expectations weren’t really that high. That’s the main reason it stayed on my virtual to-be-read mountain. However, after reading Binti earlier this year I found out I like Afro-SF (or really POC-SF, including Ciu Lixin’s work). I’m happy to say that this work didn’t disappoint. The base is a very solid alien-invasion story (even though it’s a slow invasion) with nice elaborations about the impact of said invasion on not only Nigeria, but England and the US as well. Kaaro is a very human character, flaws and all. The only criticism I have of Rosewater is that the philosophy behind the invasion (the xenosphere, the biodome, the ultimate goal and result) seems to be hurried at the end of the book, while I would have loved to know more about it. Four out of five stars from me.