The Long Way to a Small, Angry Planet by Becky Chambers 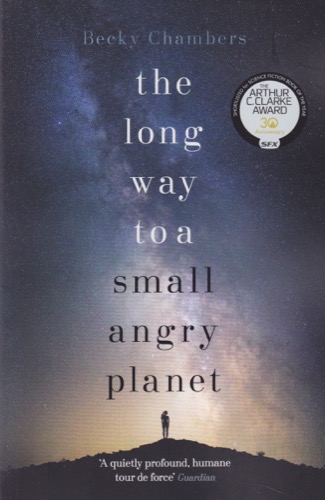 One of the bigger hits in science fiction books in the past few years is The Long Way to a Small, Angry Planet by Becky Chambers. I had heard of it when it came out, and I know it has been popular ever since. The third part (Record of a Spaceborn Few) will come out in a couple of months so the whole Wayfarer series is all over the blogs again. To be honest, I never picked up this book because when it first came out back in 2015 I read a review that said that it’s treatment of POC characters (or aliens I guess) was problematic. I can’t find the review anymore, and don’t remember what exactly was the reasoning behind it, but to me it was a buzzkill. I know I am very very very (I mean, extremely) bad at spotting bad treatment of POC, LGBTQ or even just female characters in books (and this happens a lot in SF, especially the old works I also like to read). Whole topics are dedicated to if we even should have our kids read these books, and I never see the problem. Of course, who am I, as a white female from a rich country? I don’t feel victimized, but can’t judge the feelings of others. Anyway, I try to follow reviews and opinions of others in this matter, and that was the reason I never got this book. In the end I caved, thinking that if it really was that bad, it wouldn’t still be this popular on blogs and forums that are normally pretty vocal and don’t cater to the best-seller status a work or author might have.

In The Long Way to a Small, Angry Planet we journey on the Wayfarer, a ship that punches wormholes through the fabric of space to enable others to use them. Our main character is Rosemary, a human clerk who joins the crew because while captain Ashby is a brilliant captain, he is horrible with his filing. Others on the crew are the cook and doctor Dr. Chef (a Grum), the human technicians Kizzy and Jenks, the human algaeist Corbin, the pilot Sissix (an Aandrist), the navigator Ohan (a Sianat Pair) and the ship’s AI Lovey (short for Lovelace). One day they get the job of a lifetime, flying to a planet to punch a hole back to occupied space. The only problem is that the planet is near the core, is populated by the nastiest, strangest alien race, and it seems the treaties aren’t respected by everyone.

This book is more about “The Long Way” than “The Small, Angry Planet”. And that’s fine. Without real knowledge of genre descriptions, I would call this a “cozy-sf-story”. It’s more about the characters, about discovering this whole galaxy of other species and ways of life than it is about the conflict at the end of the story. Rosemary is our protagonist, and like Rose Tyler in the first series of the Doctor Who reboot, she knows about as much about life in the galaxy as we do. This enables her to ask the weird questions so we can also understand what is happening. All in all a very enjoyable and nice book, and I think I’ll pick up the other two soon. Four out of five stars.