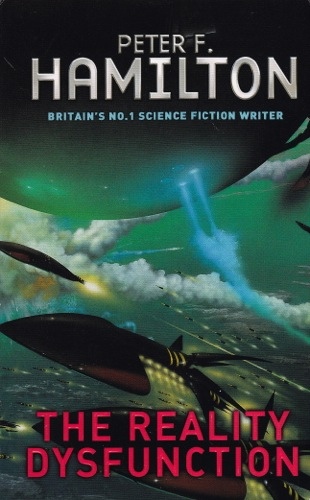 Warning: Maybe some spoilers for the story line, but mostly about what happens in the first 200⁄300 pages.

Lately I have been on a roll with my reading, almost having read more this year already than in the whole of last year. I figured if I was reading this much, maybe this is the right time to tackle some of the big ones. The door stoppers, the books that cost me more than a week to read. I have several of Peter F. Hamilton’s works on my shelf, but never actually read one. I just kept buying them because I should love his works. As far as I know they are big, space opera, hard science fiction type works. Right up my alley I should think.

The Reality Dysfunction is part one of the Night’s Dawn trilogy. Writing a summary of part one of a nearly 4000 page trilogy is pretty hard, because there are many storyline, but the gist is that we are 600 years into the future. Travelling through space is not that hard anymore, and we have colonized planets and asteroids alike. Humanity is mainly divided into two groups, the Adamists (pure humans) and Edenists (humans with enhancements and who work with live material called Bytek). Planets are usually colonized by ethnical or national groups (so you have a French planet, an English planet etc.). There are also alien races, called xenocs collectively. Some work with the humans, some have no contact and some have already disappeared.

Anyway, on one of the newly colonized planets, Lalonde, a planet with rainforests, mud and a lot of poor colonists, one of the xenocs that hasn’t had contact with humans and which is made of thought, comes into contact with a nasty piece of work called Quin. Quin has been exiled to Lalonde, forced to work in slavery. He is also a follower of God’s Brother, aka Satan. The contact between the xenoc and Quin causes souls from dead humans to possess living humans. Apparently the afterlife is really horrible, and they all want to come back. They start taking over the humans of Lalonde, helped by their amazing powers of illusion and electric zaps.

This is just the main thread of the story, there are many more, with not all of the angles coming back to the possession storyline (yet). As soon as I started reading I knew this was the book for me. Many storylines, long history, great settings. It’s just the first part, and it really is part one. There isn’t a real ending, more of a cliffhanger. I give this part four out of five stars, the last star is missing because the possession storyline is pretty depressing and unrelenting. I can’t wait for part two.