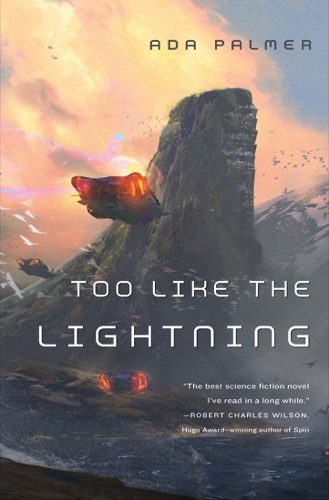 Recently tor.com has started up their book club again, and for the month of March the book to read was Too Like the Lightning by Ada Palmer. This book has been on my wish list a while based on the buzz around it. On the forums I frequent (on LibraryThing) the opinion is love or hate, so I was really curious how I would find it.

It Earth, twenty-fifth century. Fast travel through flying cars means the world is within reach, with people living on one side of the world and working on the other. After a big war nations and religions were deemed high risk to peace. Instead of nation-states there are several “Hives”; groups of people with a similar outlook on life. Each hive has their own dress, laws and capital. Instead of religion people get an sensayer, a cross between a priest and a therapist who will explain all philosophies and religious opinions to their “patient” so they can form their own opinion. When a crime is committed, one form of punishment is to become a servicer, one who is always in the service of others. People use servicers for all kinds of tasks, and their payment is the food they get.

In this elaborate world created by Palmer we follow a story told by Mycroft Canner. Mycroft is a servicer, but one that for one reason or another is always on call to people in very high places. Think the main company-family who runs nearly all cars flying around the world, hive leaders and a wonder child who may change the future. The events unfurl when there is a break-in at the Saneer-Weeksbooth bash’ (a bash’ is a sort of family-unit not based on blood). Saneer-Weeksbooth are the ones responsible for the car-network, and as that is one of the main pillars of the world economy, this break-in is taken extremely seriously. However, the thief didn’t take anything, but left something. And when the investigation starts, a whole conspiracy is unraveled that could spell disaster. Meanwhile we are also dealing with the wonder child, and we find out what Mycroft did to become a servicer, something so horrible just the name Mycroft Canner is enough to cause horror around the world.

I tried to summarize a bit about the world-building and story, but I struggled. Not because it’s bad, but because there is so much happening that it’s hard to write it all down in a paragraph (and not spoil anything). I haven’t even told you about the writing style. Mycroft Canner is telling the story, but he has decided to use the style of the nineteenth century to do it. With long chapter titles and gendered pronouns, this makes for a wonderful style, and an easy way for us from the twenty-first century to relate to the strange and changed world of the twenty-fifth. And after we get that wonderful world and interesting style, we also get a great conspiracy in which a lot of storylines come together. I get why for some people this book just doesn’t work, but I found it great. I can’t wait to read the other three books in the quartet. Five out of five stars from me.