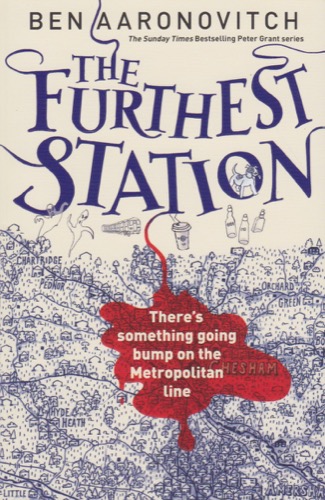 One of the writers I am a completist about is Ben Aaronovitch (only the books though, the comics haven’t gotten to me yet). He writes the wonderful Rivers of London series, about the department of the London police that deals with the more… unusual cases. It’s a world in our time, but one where magic still lives even though we normal people never notice. Things like ghosts, river spirits, Punch & Judy and all kinds of other (nasty and nice) magical creatures.

Last year a novella was released, The Furthest Station. When I came across it while out book shopping a couple of weeks ago I couldn’t contain myself and I picked it up and read it right away. It’s a nice (too) short story to tide me over while I wait for book seven, out later this year.

In The Furthest Station people on the tube have been having weird experiences. They seem terrified or upset enough to complain to police or other commuters, and yet forget about the entire event not even five minutes later. Because everything about this screams weird pretty soon PC Peter Grant is called in to help with the investigation. Pretty soon he and his colleague Jaget Kumar of the British Transport Police, his cousin Abigail and of course Inspector Nightingale figure out that they aren’t dealing with only ghosts, and a very real, very present person’s life may be in serious danger.

I have said before, I am just getting into reading novellas. The cost versus the number of pages was always a sore point for me. However, this is one of the few hardcopy novellas I own, and I don’t regret it. It’s a perfect bite-sized Rivers of London story, with enough of the mood and setting to tide me over until part seven, and the refreshing lack of major plot points like the faceless-man. In this way, it’s just a light entertaining story between major tales. No need to read it to keep track of the series, yet you’ll be missing out on some fun if you don’t. Totally worth it in my mind, for five out of five stars.