The Curious Charms of Arthur Pepper by Phaedra Patrick 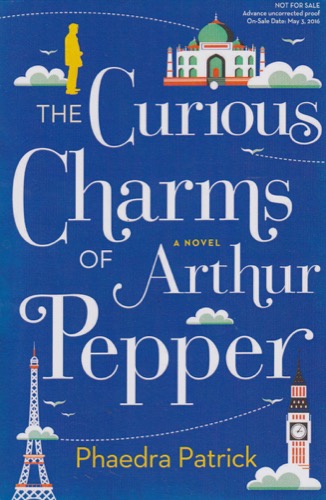 Arthur Pepper is an elderly man, recently widowed. His life can be described as pretty boring, his environment is pretty small. His best friend is a plant his wife used to like, and the only person he speaks to regularly is his well-meaning neighbour he wants to avoid. He almost never talks to his kids, a son in Australia and a daughter with her own problems. When Arthur is finally ready to clear away his wife’s clothes, almost a year after she died, he finds a charm bracelet apparently owned by his wife. But even though they have been married for decades, he’s never seen this bracelet. When he calls the phone number on one of the charms (a small elephant), he starts an adventure that takes him far outside of his comfort zone and into his wife’s past. On the way he comes into contact with all kinds of people he’d never have met in his old life, and learns a lot about his wife, his own life and his family and friends.

“Arthur Pepper” is a charming book about a charming old man. The book is comparable to “The Unlikely Pilgrimage” in that it is also a emotional journey of self discovery of an older British man. Although the issues covered in this book (loss of a spouse, family relationships, hidden pasts) the book itself is never really heavy. The adventure Arthur goes on is a little less adventurous and ends a bit sooner than I expected, but that also fits this story. As recommended on the book, if you like books like “The Unlikely Pilgrimage of Harold Fry”, you will like this book. I really enjoyed it, and can see this being a hit in the summer.