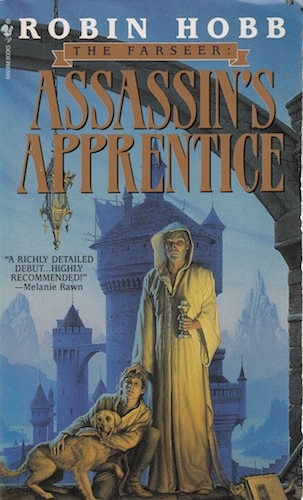 I bought this book (this trilogy actually) over ten years ago when I was really into fantasy series. I always bought trilogies as a whole, because I hated waiting to read the next part, and back then it was a bit harder for me to find books. So, anyway, I bought the entire Farseer trilogy by Robin Hobb because it was (still is) considered a very good fantasy series. I started reading it… and after about 150 pages put the first book down and never looked at it again. The depressing life of Fitz the bastard just was too much for me. I’ve seen this trilogy on many best of lists and recommendation lists but never had the courage to pick it back up again. Depressing books just aren’t for me. I even had one LibraryThinger say to me that she could see why I personally did not like it.
But this year I’m going to the World Science Fiction Convention (LonCon3), and Robin Hobb is one of the guests of honor. I felt bad thinking that I might attend a session, and still not have read any of the Farseer books. So, I picked “Assassin’s Apprentice” back up, and started again.

FitzChivalry is the bastard son of King-in-Waiting, Prince Chivalry Farseer of the Six Duchies. When he’s six he’s brought to the palace by his mother’s family, and from then on he’s a disruptive force in the court, whether he wants to or not. He is raised by his father’s man and stable master Burrich. His father gives up his throne and leaves the court (and Fitz) because of Fitz. Meanwhile Fitz learns that his connection to animals, the way he can be in their minds, is called the Wit and is forbidden and punishable by death. He is called to the king, and from then on he’s the king’s man. He is secretly apprenticed to the king’s assassin Chade, while also being trained in other skills like fighting, writing, reading, and the Skill. The Skill is magic mostly used by those of the Farseer line where they can see the minds of others with the Skill, to exchange information with them, give or receive strength or to influence others without them knowing. Fitz’s life is busy, complicated and difficult. He is sent on missions for the king, and has to survive court life, which is made difficult by him being a bastard.

There is a lot going on in this story, and Fitz seems to draw the short straw so many times. That is the aspect of the book that made me put it down a decade ago, and it took some effort to keep going this time. At the end I was just waiting for the next bad thing to happen. That is not a nice feeling, and it made reading this book not all that enjoyable. But the rest of the story is pretty good. I like the magic of the Skill and the Wit. I liked the mystery of the Red Ship Raiders and Forging which makes people seem zombie-like (alive but without morals or any real soul). And the hint of the Elderlings, which seem to get larger in following books (because this trilogy is one of several in an arc called “Realm of the Elderlings”) is what draws me to the next book. Not quite my cup of tea but still good. Four out of five stars.