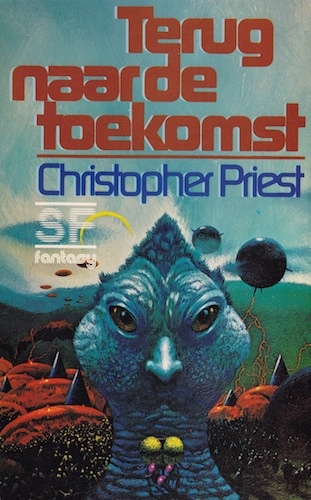 I’m a sucker for time travel novels, because it mixes my love for history with my love for science fiction very nicely. So, any time I see a (second-hand) book about time travel, I find it very hard to resist. I picked this book from mount To Be Read at this moment because Christopher Priest is one of the guests at the World Science Fiction Convention in London (Loncon3) this year.

Edward is a traveling salesman in Victorian England. He meets Amelia, assistant to inventor Sir William Reynolds. Edward is a fan of this new invention, the car, and he knows Reynolds is too. He does everything he can to be introduced to Amelia, so he can meet Reynolds and maybe sell him some wares. Amelia and Edward meet, and Edward is smitten with Amelia. Amelia introduces him to Reynolds, and shows him around Reynolds’ estate. Reynolds has moved on from cars to other inventions, including a self-propelling bicycle and a… time machine!
Edward and Amelia try out the time machine, that cannot only travel in time, but also in space, and of course, things go wrong. They find themselves in very strange surroundings with very alien beings. Soon they figure out these aliens want to attack and take over earth, and they try everything not only to return to earth, but to save it too.

I read this novel without knowing any of the back story. While reading it I thought it fit rather nicely in with the works of H. G. Wells, ‘The Time Machine’ and ‘War of the Worlds’. After finishing I read on Wikipedia that this was exactly what Priest intended, so I guess he succeeded. What I loved most about this novel was the way Priest really succeeded in making this feel like it not only takes place in Victorian England, but was also written in that time. The adventure of Edward and Amelia itself is pretty fantastic and this book is very enjoyable. I give this book four out of five stars.