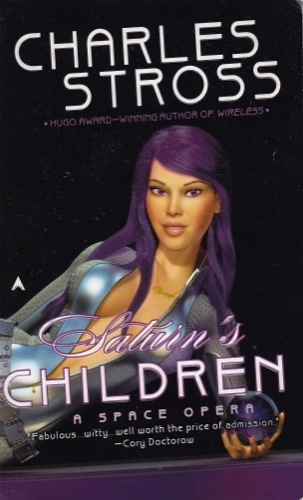 I read this book in my quest to read as much by authors who will attend the World Con in London (Loncon3) this year, before I go myself. I also read it because Stross is nominated for a Hugo for best novel for Neptune’s Brood, which is the (loose) sequel to this book (I only found this out after reading it, in preparation for writing this review). I did NOT read this book because the cover was so inviting.

Freya is an android. More specifically, she is a female android made with the one purpose of being a sex-bot for humans to have sex with. The only problem is that humans were extinct long before she was even ‘born’. She lives without being able to fulfill the one goal programmed into her. To earn some money, and escape the wrath of an aristo (an android that is of a higher class, rich, owning other androids), she starts work for the Jeeves corporation, a shady corporation that offers various services, such as smuggling, spying and maybe more. While she’s working for Jeeves, she also tries to find out what happened to one of her sisters (made in the same mold, from the same master-mind Rhea) that is not reachable, and to another sister that worked for Jeeves before but has since died. Freya gets caught up into a big quest to recreate ‘pink goo’, the building block to create a human. This is a controversial issue in android society, as all androids are programmed to see humans as their ultimate masters.

Despite its futuristic setting, with space travel and androids, this still felt like an old spy thriller to me. Some aspects of it were influenced by its setting, but at the heart it was still a thriller. And the thing is, that is not really my genre, and I did not enjoy this book as much as its popularity lead me to expect. I also was confused by Freya’s ‘voice’ sometimes, because she had the memories of her sisters loaded some of the time, and it was her describing the memories of her sister. The book was nice, but not more than that. Three out of five stars.