Don't Try To Find Me by Holly Brown 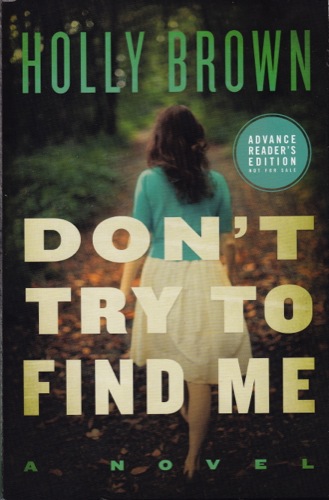 I have to be honest here, when I saw that “Don’t Try To Find Me” by Holly Brown was recommended for those who loved “Gone Girl” by Gillian Flynn I was intrigued. But does this book live up to “Gone Girl”, a book that people seem to love or hate, not much in between?

Marley is a fourteen-year-old girl from a happy, normal suburban family. Dad Paul is a control freak, and mom Rachel is a homely wife with a job to keep her occupied. They have no money troubles, they live in a nice former farm in a small town; in short, everything seems to be well.
But then Marley disappears, leaving behind her iPhone, iPad and a note on the whiteboard in the kitchen, telling her parents “Don’t Try To Find Me”. Of course they don’t listen, and Paul starts an online campaign, using Facebook and Twitter and a special website to draw attention to their lost daughter. Rachel seems lost, not knowing what to do or how to react. Soon it is revealed that she has her own secrets, secrets that made her lie to the police about where she was the morning Marley disappeared.

The book follows Marley and what happens to her, and Rachel in her own struggles and search for Marley. The twist in the story is not as shocking (or sick) as the one in “Gone Girl”, but for me, that made the story more real. Marley is a pretty grown-up fourteen-year-old, maybe a bit too grown-up to be realistic. However, Rachel’s side of the story felt very human and very realistic. Partly this is because of her flaws; she is not a perfect mother or wife. It is also because the other people in the story, Paul and others, react in very human ways. Everybody is flawed but everybody tries their best.
I read this book in one day, it is a quick read. On the one hand that is because it is not very surprising, it is a ‘real’ story. On the other hand, it doesn’t need to be anything else, it is good as it is. I would recommend this book to those readers who like real-life drama, and those who felt that “Gone Girl” was just a bit too much. I enjoyed this book, and give it four out of five stars.