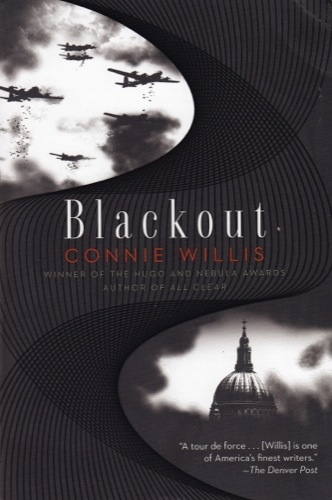 (This is a review for both Blackout and All Clear, because they are really one book)

Connie Willis is one of my favorite writers, mainly because she combines history and science fiction so very well. What also helps is that her novels are sort of wish-fulfillment for me, because they have historians from the now (well, the future now) travel to the past to study it, even if the historians usually get into trouble. The first book I read by Willis was “Doomsday Book”, which takes place in 1300s/2060, well in my favorite historic period, the middle ages. The second book was “To Say Nothing Of the Dog”, taking place in 1800s/2060, not my favorite period, but the Victorians are still interesting and entertaining. The latest time travelling historians book(s) is/are “Blackout” and “All Clear”, two novels that are one story (they cannot be read out-of-order or separately). This story takes place in 1940⁄45 and 2060, the Second World War in England. Definitely not my favorite period, too close to home. Because of that I was hesitant to read this story. Eventually the fact that it was by Willis won out over my non-love (not hate) for the period. And I am so glad I did, because this story was terrific.

We’re back with the Oxford historians in the 2060s. Several students have trips planned to the past for their research. However, the lab is canceling trips left and right and switching schedules around. Michael, Polly and Merope try their best to have their trips to the past happen anyway, despite being less than well prepared. Merope goes to the English countryside in WWII, as a servant at a country house that has taken in evacuated children from London. Polly is in London during the Blitz, safe because she knows where the bombs will hit. And Michael is near Dover to experience the evacuation of British soldiers from France by the local fishermen.
But the lab had its reasons for being so panicky with regards to the time-travel trips. Because things don’t seem to happen as they should. And our students are doing things that seem to affect the past. Could they, by saving one of their local friends or by being caught up in the moment, change the outcome of the Battle of Britain? And how will they return to Oxford, now that the drop sites seem disabled? And is Professor Dunworthy just going to leave them stuck in the past?

Because the historians in these stories are remarkably similar to us (living in relative peace, with advanced technology) their observations of the period of WWII and the people living through that time are very relatable. Even for me, someone who rather avoids any ‘entertainment’ to do with WWII, these two books were great. I think the fact that the story is contained in England (mostly London and surroundings) and because the people who Merope, Polly and Michael meet are just the regular people from the street, it makes it hit home. People working in a store, trying to keep their daily lives going despite nightly bombing raids. The time-travel adventure (will they return home, have they ruined the future, will they die in the past?) is very good too, and you feel the sense of urgency in the story. Simply terrific, and I really understand why this book has already won the big three awards of science fiction (Hugo, Nebula and Locus) and was nominated for one more (Campbell memorial award). For me, both parts are five out of five stars.