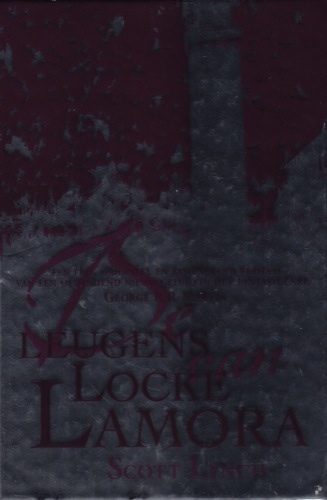 As with my earlier read, the main reason I am reading this book now is because we are going to LonCon 3 this year, and Scott Lynch is supposed to be there. I have known about “The Lies of Locke Lamora” (in Dutch: “De Leugens van Locke Lamora”) for a long while now, I’ve even had it on my shelf for about 1,5 years now, but I never picked it up to read. Until now, and I have no regrets (maybe a regret in waiting so long). Locke Lamora is a thief in Camor. Not a normal thief, he is a con-artist, who’s not even in it for the money. His life is pretty comfortable with his four friends Jean Tannen (huge, smart and a good fighter), the twins Calo and Galdo Sanza (smart and quick) and Bug, their apprentice (young, stupid and eager). He is working the biggest con of his life. Meanwhile the structure of thieving gangs in Camor is threatened by the Grey King. Locke needs to work hard to stay alive and fight for what he believes in. Locke Lamora is an unlikely hero because he is a thief. However, Locke is stealing from the rich and what the Grey King is doing is even worse. But because he is still a thief, all the way through the book it felt kind of wrong to root for him. So while I wanted his scam to be a success, I also didn’t because it was wrong. This gave an interesting dynamic to the story. It was fast paced, and Locke gets himself in to (and out of) some pretty tight spots. The only thing I missed was more relevance to all mentions of the Elders who made the glass towers and bridges. On the one hand it is an interesting history (reminding me of Steven Erikson’s style), on the other hand, what did it add to the story? I hope more will be made of this in other books in the series. “The Lies of Locke Lamora” is a fun, fast paced read about a very smart thief with a heart of… maybe not gold, but silver-gilt? Four out of five stars, and the next book of the series is on my wish list.