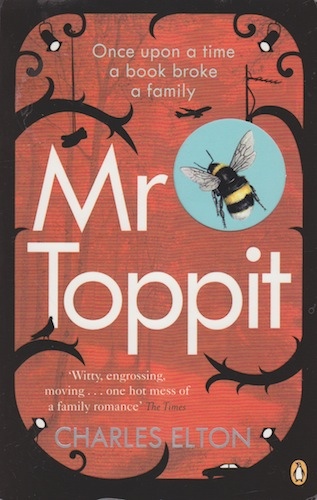 I was initially attracted to this book by its tagline, that it is a book about how a book broke a family. The summary on the back tells about a book like those about Narnia, written by an author who is also a father and husband. That writer is Arthur Hayman, who has written a couple of books about Luke Hayseed (named after his own son Luke), and his adventures in the Darkwood behind their house with the mysterious and elusive Mr. Toppit. Arthur is hit by a car while in London. The first one on the scene to comfort him is Laurie, an overweight American woman looking for direction in her life and has come to London on holiday. She follows him to hospital and alerts his wife. When Arthur dies she joins the family in their house in the country. Arthur is buried by his wife Martha, his daughter Rachel and younger son Luke. The rest of the book follows the four survivors for the next decade, and the influence, both for the good and for the bad, that the Hayseed Chronicles have on their lives. Luke has to live with not being the Luke from the books. Laurie grabs the books to give her life purpose. Martha wrestles control of the books back from the publisher who first published them. And Rachel has to deal with not being in the books at all. The idea of the story sounded good, and the story is not bad per se. But it doesn’t seem to flow right. The start of the book is pretty slow, and then suddenly a lot of events and consequences get lumped together in quick succession. It is a nice read, but I can’t help but feel that Elton could have done so much more with his ideas. Three out of five stars.