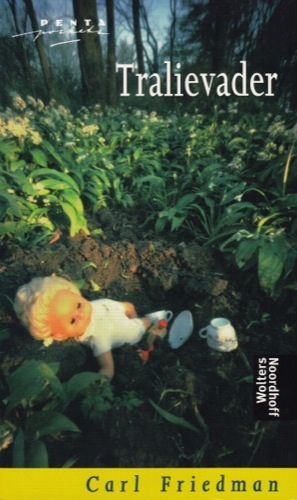 ‘Tralievader’ (translated in English as ‘Nightfather’) is one of those books that is assigned reading for a lot of Dutch high schoolers. I never believed in assigned reading, and for all the reading I do now, I skipped nearly all assignments while in high school. But recently we gathered a lot of books from our high school days from our parents’ attics, and this was one of them. Because I am trying to read more original Dutch works, and I was in a WWII ‘mood’, I picked it up. ‘Tralievader’ is told by the child of a man who has survived a German camp. He doesn’t say it like this, he says he’s had ‘camp’. The way he keeps talking about the camp and his experiences influences everything and everyone around him. Slowly his children realize that the way they are raised and the stories they hear from their father are not normal. Because of this his children have their own traumatic experiences even though they were born after the end of the war. This short novel (novella?) manages to pack a punch despite being so short. It conveys the impact of war trauma’s on not just the victims themselves, but also on following generations. Because it is told from the point of view of one of the kids, who knows no better, it is even more powerful. Four out of five stars.