The Chosen by Chaim Potok 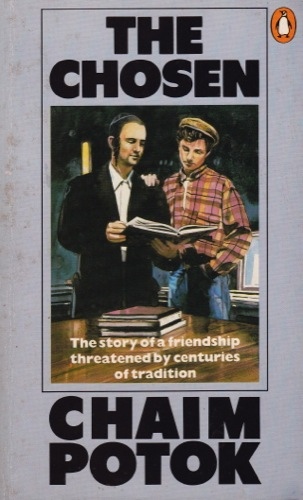 My List of Lists/Award Winners/Nominees is always on hand when I go book (thrift) shopping. That’s how I picked up “The Chosen” by Chaim Potok, and when somebody mentioned reading and loving it on LT, it moved up on the TBR list. The book takes place during World War II in New York and is the story of two Jewish boys becoming friends. The story is told by Reuven Malther, raised by his father in Modern Orthodox Jewish faith. His new friend Danny Saunders whose father is a Rebbe in a strict Hassidic community. In the beginning there is a lot of hate and misunderstanding between the two boys, but both their fathers push them closer together, making them become very close friends. During this friendship several important historical events happen, such as the death of President Roosevelt, the end of World War II, the revelations of the true extent of the holocaust and the creation of Israel. Together they discover why somebody needs a friend. That summary is so short and sounds corny but the book is very powerful. It speaks of loneliness within your community and your family. Of having the strength to choose your own way despite tradition. Of learning about your past and your future. I read this book weeks ago, and it is still so fresh in my mind. It is a very powerful, very beautiful book that I recommend to everyone. Five out of five stars.