The Brief Wondrous Life of Oscar Wao by Junot Díaz 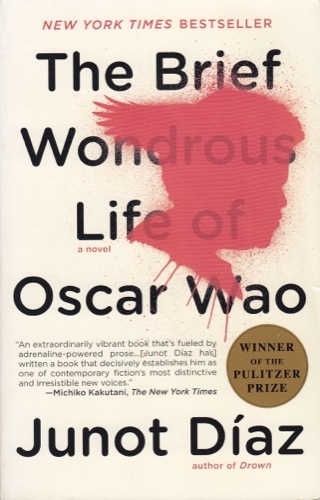 I have heard about this book, probably around the time it came out, or when it won its Pulitzer Award and National Book Circle Critics Award (among others) in 2008. When I found the book in a second-hand shop I could not resist, and it’s a good thing I didn’t. Oscar Wao is an overweight Dominican boy growing up in New Jersey. He is obsessed with science fiction and fantasy, falls in love with several girls (but fails to get a relationship because of his introverted character and looks) and lives under a Dominican family curse (Fuku). The story is told in several parts (Oscar’s youth, his family’s history, Oscar’s end) and by several people. I read books purely for enjoyment. I know books like these have multiple layers and meanings, but when I read just before (or during) falling asleep, all I want is a bit of entertainment. In this book, I think I’ve missed half the story because of that (in fact, looking at the Wikipedia entry for this book, I know I did). But that doesn’t really matter to me, because I still enjoyed it a lot. Junot Díaz writes in a way that feels like a good storyteller is telling the story to you. The only thing that I did not like was all the Spanish in the book. I don’t speak/read/understand Spanish, and didn’t really feel like looking it up. I understand why the Spanish was used and that it enhanced the story, but I missed that enhancement. Because of that, the book gets four out of five stars.