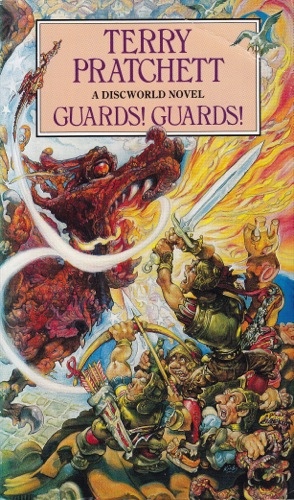 ‘Guards! Guards!’, the eight Discworld novel focusses on the guards of the Ankh-Morpork City Watch. The main character, Carrot is a human foundling who grew up with dwarves (and thinks of himself as a dwarf) and who volunteers for the City Watch. This is something nobody ever does, because the City Watch really has no function now every part of life in Ankh-Morpork, including criminal life, has been thoroughly regulated. However, there is a secret brotherhood who is planning to overthrow the Patrician in charge of Ankh-Morpork and install a puppet-king by summoning a dragon. When this plan gets out of hand, it is up to the City Watch (all four of them) to save the city. This is another enjoyable Discworld novel, with the same absurd humor and references to our world I have come to know and love from Terry Pratchett. On the other hand, it wasn’t anything more than that. So, three out of five stars.