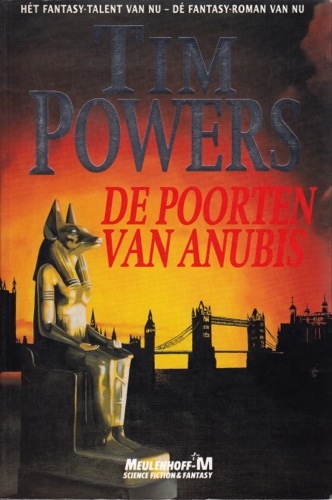 I found ‘De poorten van Anubis’/‘The Anubis Gates’ at a thriftshop and was intrigued because it promised time travel (I love time travel) and it has won/was nominated for awards (I always carry The List with me when book-shopping, a list of award nominated or winning books). So, when my last two books were a bit disappointed, I figured ‘De Poorten van Anubis’ would be a nice pick-me-up. Well, it wasn’t.There are still magicians from the Egyptian olden days, and they want Egypt back under the rule of the gods (you know, Ra, Isis, Anubis etc.). However, now, in 1802, England has taken over Egypt from the French (who could be trusted to rule in name only, and leave the Egyptians to it). So, why not destroy England and regain control over Egypt (and the rest of the world, while they’re at it). But whatever they did, their ritual caused holes in the fabric of time, and one man in the 1980s has discovered this. So he organizes a trip for a group of interested people to a reading by Samuel Coleridge in 1810. Our main character, expert on the period Brendan Doyle gets stuck in the period, and is left to fight not only the Egyptian magicians but also beggar guilds, a werewolf-shapeshifter and other people who seem to have it in for him, all while trying to figure out what is going on, and save the future. When I read the summary of this book, I thought I’d love it. I mean, time-travel, Egyptian mythology and a shapeshifting werewolf, what’s not to love? Well, the mixture of these elements. I admit, in part it may have been my frame of mind, but to me it really felt like the writer threw all these elements into a melting pot and this story came out. There is just too much going on, and in the end, the ending feels like a let down. Enjoyable for the ideas, but not much more than that. Three out of five stars.