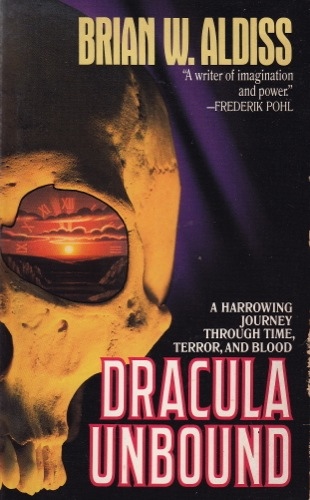 Brian W. Aldiss is known as one of the greats of Science Fiction. He has published many stories and books, and is still active. Whenever I come across one of his works while thrift-shopping, I pick it up. I have 22 works by now, and have read only three, of which only one was one hundred percent science fiction. The other two, this one and Frankenstein Unbound, are a mix of science fiction (time travel mostly) and classic horror. It is the future (1999, but still) where one inventor/entrepreneur, Joe Bodenland, has developed a machine that can keep a thing (like toxic waste) at one certain point in time, making it effectively disappear. He is also involved with archaeological research, and because of that he is called when one archaeologist finds a casket with a human body below the K-T boundary (so more than 65 million years old). While looking into this the team gathered at the site get the feeling one night that a train is coming out of nowhere and travels over them at high-speed. Of course Bodenland must investigate, and thus he enters the Time Train that travels through time while carrying “The Fleet Ones”, vampires. He ends up in the nineteenth century, picks up Bram Stoker and his gardener, and together they must fight to save humanity from near extinction and servitude in the future by killing the vampires (led by Lord Dracula himself, of course) in the far past. Like ‘Frankenstein Unbound’ the book was a bit chaotic, another 300 pages and more time to work out the ideas in this book (time travel, vampires as an evolved species, humankind in the future) would make it so great. As it is now, the ideas are original, the action is pretty good, and the conclusion was good. Still, three out of five stars.