Return of the Crimson Guard by Ian C. Esslemont 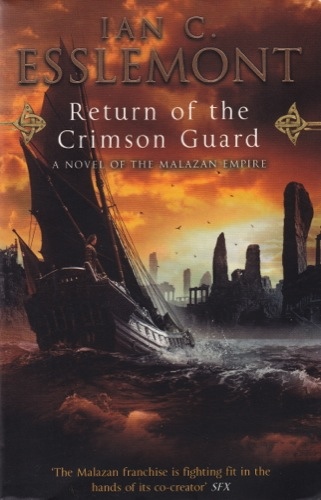 ‘Return of the Crimson Guard’ is the second book in the second Malazan series, ‘Novels of the Malazan Empire’ by Ian C. Esslemont. This book takes place between ‘Reaper’s Gale’ (book 7) and ‘Toll the Hounds’ (book 8) of the original ‘Malazan Book of the Fallen’ series by Steven Erikson. The main character-group we follow is (of course) the returned Crimson Guard. These are mainly avowed, nearly immortal warriors who have vowed to take down the Malazan empire. But the Wickans are also present, as are characters like Toc the Elder (indeed, father of). The main story in the book is about the battle between the Malazan army, led by empress Lasseen in person, and the Crimson Guard. There are all kinds of other armies surrounding this battle, fighting against the Malazan army or each other. Of course there are magic and some ancient creatures who are also part of this battle. Where the earlier Esslemont book was a thin (for the Malazan series) book covering just one night, this book is more in line with Steven Eriksons door-stoppers. The style of the book with a lot of characters, several points of view and an introduction taking place in a different time than the rest of the book make the book feel like a Steven Erikson imitation. It is like Esslemont took all the things Erikson set up in his books, the history, the magic, the characters and the mechanics, and then started to write a story using them. How he used them felt forced (“oh yeah, here’s a D’ivers”) and unreal. We are spoiled by Steven Erikson’s works with all their depth. I think that without that memory, and the joy of being back in the Malazan world, I would not have finished this book. As it is, in combination with all the other Malazan works, it is a three out of five-star book for me.