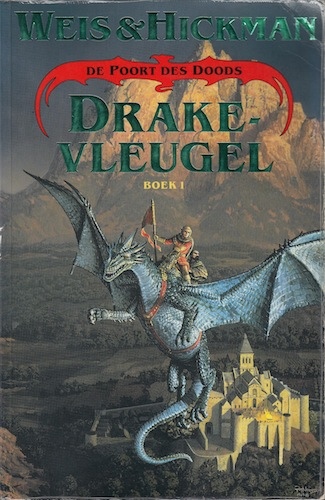 Last year I picked one fantasy to read, reading parts of it in between my other reads. That was a success, so this year I decided to do the same thing again. I just had to pick a series (I have several waiting to be read on my shelves), and I went for The Death Gate Cycle by Margaret Weis and Tracy Hickman. Part one is “Dragon Wing” (“Drakevleugel” in my Dutch translation). In the Death Gate Cycle there are several races. You have your dwarfs, elves and humans. But you also have Sartrans, who’ve imprisoned the Patryns in a horrible labyrinth. Slowly the Patryns are escaping, and one of them, Haplo, is sent to the floating world above to spy on the Sartrans. Meanwhile, in that floating world above, a contract-killer, Hugh the Hand is given the assignment by King Stephen that will change his entire outlook on the world. The world above where Mysteriarchs (level 7 human wizards) live, the world where humans and elves live in a near-war state, and the world below where dwarves/Gegs live and mine water for those above. I was a bit disappointed in this book, I think because I expected a full-fledged fantasy world. Somehow this book never really rose above the level of young adult for me. Maybe it is marketed as YA, I’m not sure. It’s not a bad book, just not very original or deep. It was a nice read and I will continue with the series. After finishing I read a review mentioning that this is the worst book of the series, so I have hope it will get better. I also want to know more about the Patryns and the Sartrans (I’m not quite sure yet who of the two are the bad guys). Three out of five stars for me, but a fun read for a young fantasy love I’d think.