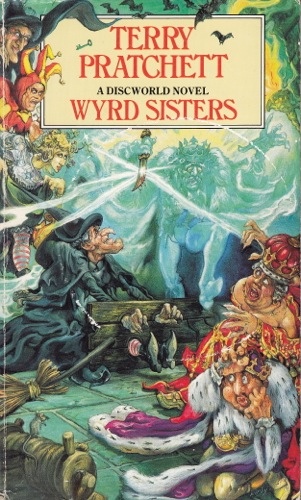 Terry Pratchett’s Discworld series is one that is guaranteed to deliver absurd humor and fantasy related to our lives on earth while taking place on a strange disc shaped world held up by four elephants on the back of a floating turtle’s back. ‘Wyrd Sisters’ is part 6 in the series as a whole, and part 2 in the witches series featuring Granny Weatherwax and the other witches of the Ram Tops. They get trusted with the orphan son of the murdered king of Lancre, and even though they find a home for him, they stay involved with the kingdom, simply because they live in it. So together, even though they really shouldn’t, they gang up to save the kingdom from the evil Duke and return the true king to the throne. What else can I say? This was a true Discworld novel, fun to read, great fantasy, nice story. Exactly what I expected, and needed. Four out of five stars.