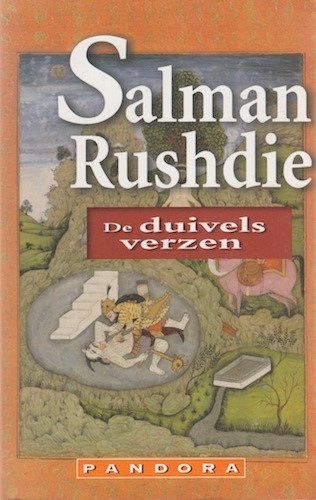 When this book was first published back in 1988, I was five, so all I know about the controversy is from what I picked in later years. Still, I know there were (are?) a lot of things going on about this book, so when I saw it at a thrift-store, I just had to pick it up to see what the fuss was about. Later on I found that this book could be classified as ‘magical realism’, one of my favorite genres, which made me pick it up from Mount TBR somewhat faster than usual. It was hard for me to get into this story, because it took me a while to understand (enough, never completely) what was going on. We have our two main characters, two Indian men, Gibreel Farishta and Saladin Chamcha. Gibreel is a Bollywood actor in India, Saladin is a voice actor in England. They meet on a plane from India to London which crashes, with them falling down to earth and surviving. However Gibreel is or imagines himself to be the Archangel Gibreel, and Saladin is or is turning into a devil. For the archangel Gibreel we also see the flashbacks that he sees, of his visits to Mahound (Mohammed) when he is receiving his visions which are written in the koran. One of these visions is the source of the title of the book, the Satanic Verses. The story was very confusing to me, and it took me a (long) while to get into it and enjoy the story. In the end though, I really enjoyed the story and the ideas of Rushdie in the book. I found it harder to write this review, to formulate my thought about the book, than reading and liking it. Four out of five stars.