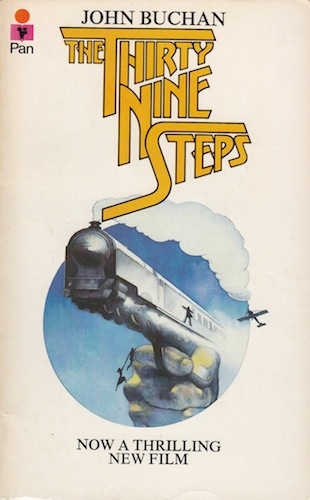 ‘The Thirty-Nine Steps’ by John Buchan, first published in 1915 is a true classic adventure. Reading about the work on Wikipedia teaches us that it is one of the first ‘man-on-the-run’ thrillers. It is well-loved because its hero, Richard Hannay is a man who puts his country before himself. The book has been made into many movies (the most famous version is by Alfred Hitchcock), a play and many radio adaptions. It is early 1914, and Richard Hannay, both the main character and the narrator, is in London after a stay in Africa (he is originally from Scotland). He is bored with his normal life in London and yearns for adventure. He runs into adventure by way of one his neighbors, Mr. Scruder, an American who claims to have faked his death because he has uncovered a secret that will cause war to erupt in Europe. After the man is murdered in Hannay’s apartment, he goes on the run, both to evade police (who will surely think he murdered the man) and uncover and stop the plot Scruder was talking about. The story is pretty fast paced (my edition, from Pan Books, 1980, only has 138 pages) and adventures. Hannay is not only on the run from the police (who aren’t that hard to fool) but also from an evil group that is pretty smart. While the chase was fun to read about, there were so many coincidences to help the story along (the people Hannay meets who help him with just the right stuff or connections for example). It was a pretty enjoyable read, even if it showed it age a bit, three out of five stars.