A Fire Upon The Deep by Vernor Vinge 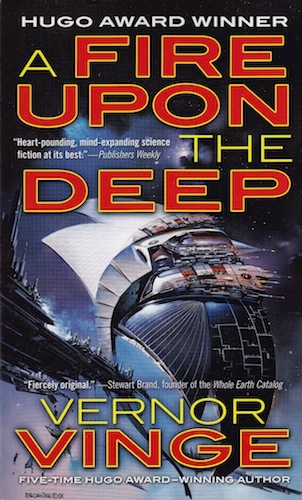 ‘A Fire upon the Deep’ by Vernor Vinge is the joint-winner of the Hugo (together with ‘Doomsday Book’ by Connie Willis). In my quest to collect and read all Hugo winners, I had bought this book years ago, just never got around to reading it. Imagine that space can be divided into zones. Each zone impacts the level of technology and development. The highest zone is the Transcend, where super-intelligent beings dwell. The Beyond is where AI, faster than light travel and anti-gravity are possible. The Slow Zone is where biological intelligence is possible, but not true AI or any of the other possibilities of the Beyond. We mostly follow Ravna, a young human from the Beyond who works on Relay, a node in the galactic communication network. Another human research delegation has awakened something in an abandoned archive they found. It is the Blight, a super-intelligent being, which is unleashed and destroys massive parts of the Beyond. Together with Pham, a recreated human and the two Skrodes Blueshell and Greenstalk (Skrodes are a kind of intelligent trees on a mechanic carriage) they realize that the countermeasure against the Blight is hidden in a crashed ship on a planet near the Slow Zone. They race to the planet, chased by many ships. Meanwhile the survivors of the countermeasure ship crash, Johanna and Jefri must survive with the Tines, dog like pack animals that operate as one being. Anyway, enough weird and truly original (to me) aliens to keep a story going. Sometimes it got to be a bit confusing, reading about all these alien species, types of ship and influence of Zone levels. I really enjoyed the parts in space and dealing with the Blight. The parts dealing with the Tines I enjoyed a lot less. I think it has to do with how both humans on the planet are used, and how nasty and backward most Tines were. In the end I liked the book as a whole, four out of five stars.