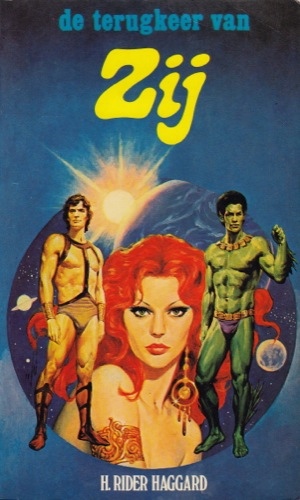 About 4 years ago Penguin published some nice editions of boys adventure book classics. I don’t really confirm to gender stereotypes, so I got myself some (‘Tarzan’, ‘The Lost World’). And ‘She’, by H. Rider Haggard. I’d read his ‘King Solomon’s Mines’ before, and really enjoyed it. I loved ‘She’ too, and loved seeing THE shard in Norwich Castle Museum. Last week while book-hunting in one of the secondhand shops in Den Haag, I came across a copy of the second book about Ayesha, ‘The Return of She’, and I couldn’t wait to start to read it. Unfortunately my edition (Dutch translation, published by Scala in 1977) not only has a cover that makes no sense to me (why is that guy green?), it’s also abridged without disclosing it. Luckily the Gutenberg Project came to my rescue, so I read the ePub version on my Nook instead. It’s twenty years after the events in ‘She’, and the same nameless editor of the first book receives another parcel from Horace Holly, containing another manuscript and an artifact. It turns out that Holly and his adoptive son Leo Vincey had another adventure with Ayesha, She. After returning to England at the end of the previous book, Leo had gotten depressed and even contemplated suicide, until he received a vision/dream from Ayesha, showing him that she was somewhere in the mountains of Ayesha. They travel to Asia and wander around for many years, until eventually they receive another sign that they are close. After a hard journey in which they nearly die they reach Kaloon, where they meet Khania Atene (who professes her love for Leo) and the jealous Khan Rassen. Their coming had been expected, and even though Holly and Leo feel they are close to Ayesha, the question is will they find her, and if they do, then what? I really enjoyed this adventure. Both the back story (the history of Ayesha, Kallikrates and Amenartas) and the current struggles are pretty cool to read, combining strange savages with lost civilizations and treasures. We learn a bit more about Ayesha, and the magic she has. I loved reading the book both because of the story, as well as the language. I’ll keep book-hunting for other works by H. Rider Haggard, and hope to find more someday (although I saw that they re-released three books in the Ayesha series just last year). Four out of five stars.