The Diary of a Nobody by George Grossmith 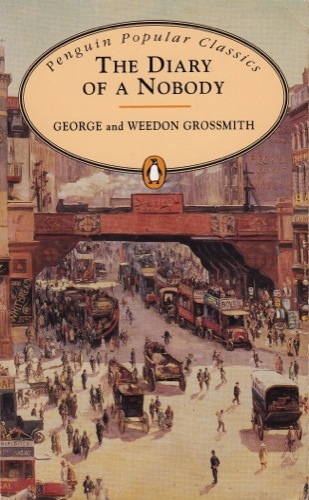 A couple of months ago I made a huge spreadsheet of books on lists (like 1001 books you must read before you die, NPR Top 100 SFF), in publisher series (like SF Masterworks) and nominees or winners of awards (like the Booker or the Hugo). This list of over 5000 books hopefully helps me choose books to read, both the best of the genres I like (SF, Fantasy, Horror) and good books out of my comfort zone (general fiction). One of the books on that list is ‘The Diary of a Nobody’ by George and Weedon Grossmith (It’s on the 1001 books and the Guardian 1000 lists). The Nobody in this diary is Mr. Pooter. A lower class man living and working in London at the end of the nineteenth century. He thinks he’s quite the gentleman, too bad nobody around him feels the same way and his life, as described in the diary, shows that. For example, he and his wife get invited to a ball, and after he’s enjoyed the evening it turns out that he has to pay for their food and drinks. Because of this he has no money for the cab-ride home, something he doesn’t realize until he has to pay, leading to a fight with the cabbie. The book is pretty funny, both in Mr. Pooter’s descriptions (he thinks he is so important) and in the things that happen. You can’t help but feel sorry for the man, he tries so hard to rise above his station in life, and nobody around him helps him, they only hinder him. The illustrations by Weedon Grossmith complete the diary. A really nice little book, three out of five stars.