The Rook by Daniel O'Malley 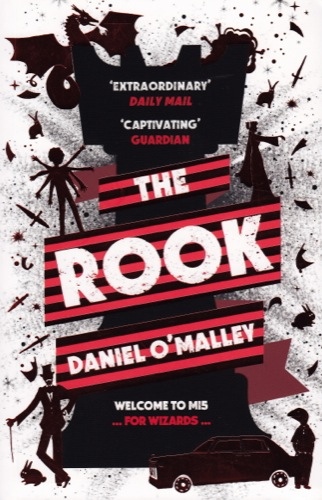 “The Rook” is one of those books that I would never have known about without my friends at LibraryThing. It was first published in early 2012, but I’ve only heard about it a couple of months ago.
The Rook is Myfanwy Thomas, a member of the Court of the organization the Chequy. The Chequy is a secret government organization that deals with anything weird (vampires, manifestations, people with strange powers). In fact, Myfanwy has a power herself, as do all other members of the Court. But, Myfanwy has a problem. She has woken up without a memory, and only knows she ‘is’ Myfanwy because of the letters the Myfanwy with memories wrote in preparation. Not only must she know decide if she is going to live as Myfanwy, she will then also have to figure out who ordered her memory wiped.
The book reminded me a lot of Ben Aaronovitch’ series Rivers of London. Both deal with a world (London and the United Kingdom) where magic and magical beings are real, and have a setting of law enforcement. However, in Aaronovitch’ world a lot more people know about how the world really works. In O’Malley’s world, the events seem to be happening on a bigger scale (the entire country needs to be protected). Because Myfanwy has lost her memory and has her previous self’s letters explaining what is going on, we (the readers) also learn bit by bit how the Chequy works and what it deals with. I loved the world and mythology O’Malley has created in this novel, mixing magical beings, politics and war. I really hope that there will be a sequel/series, because I feel I’ve just met Myfanwy and we are leaving her just when it truly gets interesting. Four out of five stars.