Against a Dark Background by Iain M. Banks 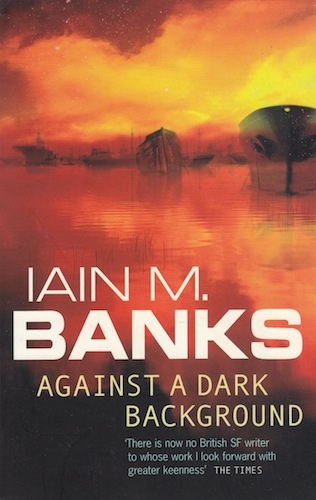 Ever since the sad news of Iain (M.) Banks’ recent death I’ve collected his non-sf works and pacing my reading of his works, because when I’ve read them all, there will never be anymore. The last one of the SF books that I have (I still need ‘The Hydrogen Sonata’), that I hadn’t read is the non-Culture novel ‘Against a Dark Background’.
Sharrow is nobility, and used to be the leader of an artifact recovery team. Now the hunt for her, by the religious Huhsz, is officially and legally opened. They believe that the fact that she is alive, or the loss of the last Lazy Gun are all that is standing between them and the apotheosis of their faith. She gathers her old team together and tries to spend the year of the hunt recovering the last Lazy Gun to save her life.
This was a ‘traditional’ Iain M. Banks book, despite not taking place in the Culture universe. You get the many story lines all coming together in one big ending that gives meaning to all that happened. It has very fast paced action, a treasure hunt (with clues hidden away) and a lot of family drama. A very nice M. Banks read, four out of five stars.