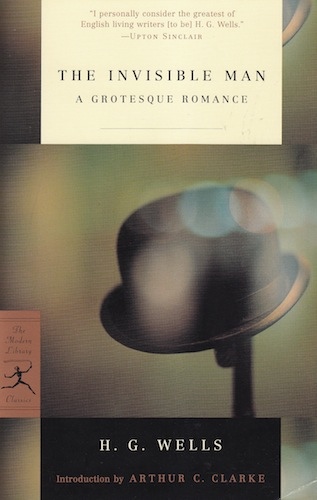 The trouble with reading famous classic works like ‘The Invisible Man’ by H. G. Wells is that the story itself is used so many times in movies, TV shows and other books, that the book itself can’t really surprise you. We already know what Dracula is, or Frankenstein’s Monster, something that an original reader in that era might not know. With regards to ‘The Invisible Man’, the title is very obvious, and I have seen the movie ‘Hollow Man’. Because of that movie I never really read the book (I didn’t like the movie). I should have known better.
One cold day a stranger, all wrapped up in clothes and bandages arrives at the Inn in Iping, an English village in Sussex. He is very rude but pays on time, and locks himself in the parlour where he performs experiments. However, stranger and stranger things start happening, including a break-in. The man gets more and more frustrated and reveals his invisibility. Undressed and invisible, he flees the village with the (forced) help of a tramp, leaving chaos behind him. He moves to Port Burdock where he is betrayed by the tramp and runs into an old acquaintance, Dr. Kemp. There he reveals himself to be Griffin, an albino student of physics. He details his discovery of invisibility to Dr. Kemp and implores him to help him. However, Dr. Kemp doesn’t feel comfortable with all the casual violence and criminality displayed by Griffin, and tries to trap him. Griffin gets away, and swears revenge on humanity, starting with Dr. Kemp.
There’s just something about nineteenth century books I love. The descriptions, the proper way of acting of the British upper class, the views of the villagers, everything is great in this book. Like most old books, I felt this one was too short (although the nineteenth century has produced some major doorstoppers too of course). I wanted to read more about Griffin, and about the consequences of his discovery. Now he is portrayed as this very angry guy with very little morals, where I think he could be more. Four out of five stars.