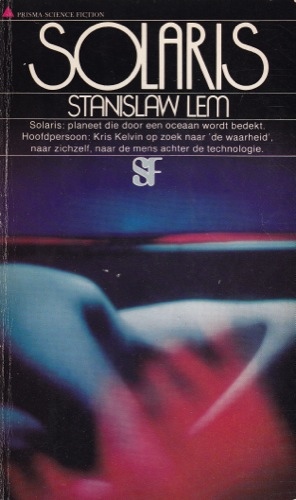 Solaris is a science fiction book that is also pretty philosophical, about the problems of communication between mankind and an alien that is so different from us, that it took us a while to see it as sentient at all.
Dr. Kris Kelvin arrives from Earth on the research station on Solaris, the first inhabited planet ever discovered. Solaris is a planet with two suns, and the orbit of the planet is influenced by the huge ocean that covers the entire planet. The ocean, which is nothing like our oceans, turns out to be alive and in a way sentient. This has led to an obsession with Contact for most scientists studying Solaris. When Kelvin arrives the Ocean has made an advancement that can be seen as contact, and this makes Kelvin analyse what contact is, what they are and if mankind is ready for contact.
Besides the actions of the characters and the ocean the novel contains many long pieces about scientific history (the study of Solaris and the evolution of ideas about the planet and its ocean) and philosophy (who are we to contact an alien species?). Because of those pieces I found the novel hard to get into. I just couldn’t care that much about all the theories about Solaris, the scientific history or the description of the ocean itself. The ideas were interesting, but just didn’t grab me. Three out of five stars.