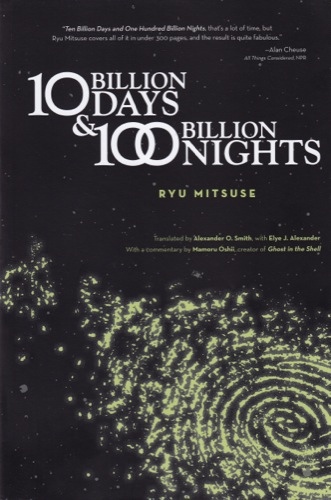 Haikasoru is an American imprint dedicated to bringing Japanese science fiction to the English-reading world. My science fiction reading is usually very US/UK centric, with some Dutch works thrown in if I can find them. Sometimes you get Polish or Russian works, and because their world-view is different, so is their science fiction. So when I learned about Haikasoru, I looked through their catalog and found some interesting books, of which “10 Billion Days & 100 Billion Nights” by Ryu Mitsuse was one. This book, published in Japan in the late 1960s and a major bestseller over there, is an interesting view on aliens on Earth.
The book starts at the beginning of Earth, with the creation of our planet by the laws of physics. Life appears (much later), and we follow the thoughts of one sentient creature. Then we get a chapter about the philosopher Plato who is looking for Atlantis. We also see Siddharta on his way to enlightenment and Jesus just before his conviction up to and including his death on the cross. But this book is science fiction for sure, because now that we have these main characters, we find out just what has been going on on Earth, and what these old beliefs and religions have to do with it.
The style of this book is very different from other science fiction books I’ve read. I always think that it is because the writer is Japanese, and Japanese storytelling (to me) seems slower. They take time to set a mood, so you are not only following the actions of the characters, but you also get into a certain state of mind. This book is similar in that way. The action is in the final part of the book, the first half takes its time to set up the story. That made the book great, because the story itself is confusing at times, and now, a week after reading it, I’m not quite sure I could tell you exactly what happened. But that wasn’t important, I loved the book, and give it five out of five stars.