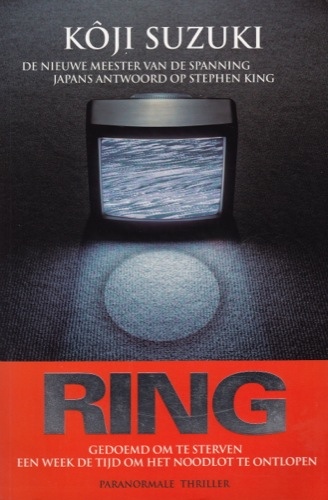 I love stories, especially science fiction, fantasy and horror, but I don’t really care for movies. They are almost never as good as the book, and I’m always easily distracted when watching movies (or TV). So, I actually pick up books when I’ve heard the movie is pretty good. The same happened here. I actually have the DVD of the Japanese movie of Ring, but never watched it. I couldn’t wait to read the book though, because I’ve heard many times that Koji Suzuki is a good writer, because I like Japanese novels (or at least, the ones I’ve read), and who can resist a nice supernatural horror tale?
Four teenager die unexpectedly, all at the same time. Reporter Kazuyuki Asakawa figures this out, and is intrigued. He starts investigating how this could have happened, expecting something like a virus that has infected all four of them. He finds out they spent a night together in a cabin in a resort, and when he spends the night in the same cabin, he finds a message from one of the teenagers not to watch a certain tape. Of course Asakawa does anyway, and that starts the supernatural race to figure out what the tape is about and how it could have caused four young healthy people to die.
This book was very good. The story (I read an English translation) is translated well, but keeps its Japanese style (in the way people act around each other, and descriptions of landscapes and houses). It made me feel like not only was I watching a story unfold, it happened in a different culture. I don’t think this book would work as well in a different setting, because of the way people accept supernatural events. It is a very good horror story, one that doesn’t have a nice ending with closure. I hope to come across other parts in the series in the future. Four out of five stars.