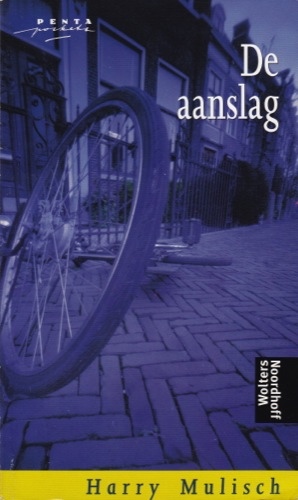 When I was going through my husbands books he once bought for Dutch class in high school, all considered must-read Dutch ‘classics’ (some are too new I think to be considered classics) I noticed that a lot deal with World War II, either during or the aftermath. I never really enjoyed books about war, because the horrors hit pretty close to home. My grandparents lived through this, for them this wasn’t fiction, it was cold, hard, reality. However, the reason these books are considered classics, and are nearly mandatory reading for all high school students in The Netherlands is because they help us understand what war was like for average people. And that the war wasn’t over on May 5th 1945 for most of them. Now my opinion is that it’s good to learn about that period in history, to understand more about our country, and our family too.
‘De aanslag’ by Harry Mulisch is one of those books. Anton Steenwijk lives with his parents and brother on the outskirts of Haarlem. One night in January 1945 they are playing a board-game in the kitchen, cold and hungry but together. They hear shots outside and see a body, that of Fake Ploeg, a policeman and NSB member. And then they see their neighbors moving the body from in front of their house, to in front of the Steenwijk’s house. Anton’s brother Peter goes outside to move the body away from their house, but then the Germans arrive. Peter flees. Anton and his parents are forced outside. His parents are taken away and their house is torched and burns to the ground. Anton is taken to the police-station and ends up at his aunt and uncle’s house in Amsterdam.
The rest of the book tells the story of how Anton deals with this event in the rest of his life. In several episodes he meets people who all were connected to the attack, such as the son of Fake Ploeg, one of the resistance fighters involved in the assassination and the neighbors. Because of these encounters he slowly comes to terms with his own feelings, and the feeling of those around him. For example, it takes him a while to realize that his daughter, born after the war, really has a different way of looking at that time than he does.
I really enjoyed this book, for as far as you can enjoy a book about such a horrible and tragic event, based on reality. The book helps the reader empathize with those who survived the war, and to realize that every choice made has consequences for others. When I started I could not put it down, and read the book in one sitting. Five out of five stars.