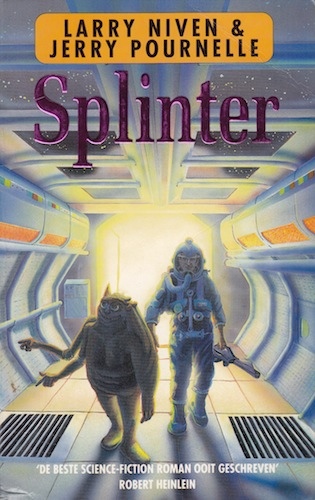 After talking about (science fiction) books with a colleague, we discovered that we both really like Larry Niven’s work. I have a lot of his books on my shelves, but had only really read the Ringworld series and ‘The Integral Trees’. My colleague recommended ‘The Mote in God’s Eye’ (‘Splinter’ in Dutch), a Hugo and Nebula nominee from 1974, as one of my next reads.
This is a first contact book taking place in the far future when mankind has conquered the stars (using an Alderson drive, that can jump between Alderson points, sort of like wormholes). A ship has flown from the star Mote, known as The Mote in God’s Eye, using a sun-sail. Upon arrival the alien pilot is dead, but human interest is piqued and an expedition of a fully equipped Navy ship and a Navy ship with civilian researchers (but under Navy command) is dispatched to make first contact. Most of the book is spent trying to figure out if the Moties, the aliens, are good or bad for humanity, and what the Empire’s policy with regards to them should be.
I wanted to like this book, it has the potential for something I would like. We have an interstellar human empire, first contact with intelligent aliens, a mystery about what their motive is, and a lot of discovering going on. But the book just dragged on. The characters weren’t that well-developed (the handsome aristocratic captain, the Scottish (New Scottish technician), the (New) Russian tsar/admiral. Their behavior seemed unreal (the trader who gets taken along on the expedition (why?) wants trade no matter what, until one little set back and all of a sudden he is the most vocal opponent?). And the Moties were much too human. The book dragged on, and I think this is the first time I think that a book should be a lot (a lot!) shorter. This hasn’t turned me away from Larry Niven as a writer, but it certainly wasn’t as good as the Ringworld series. Three out of five stars.