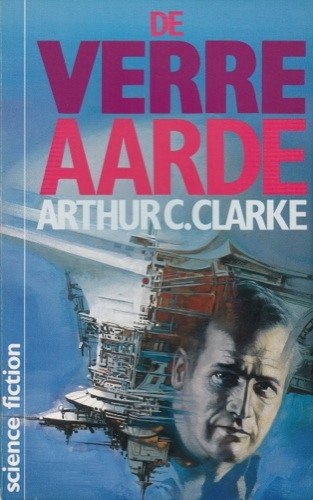 Arthur C. Clarke is both famous for his science fiction writing (he is considered one of the Big Three of the Golden Age of SF-writing) and his scientific knowledge. That means that his science fiction novels have the potential to be a lot closer to what is actually scientifically possible than most novels. In this book he tells us in his introduction that ‘inspired’ by series like Star Trek and movies like Star Wars (this book is from 1986) he set out to write a ‘humanity in the stars’ novel that is a bit more realistic (than a warp drive for example).
In the 3800s mankind has colonized, or tried to colonize several planets far from our solar system. Back in the late 1900s, mankind discovered the Sun would be going supernova around 3500, so from that point on all energy was put into developing technologies to make the escape of mankind from earth possible. On the planet Thalassa, which is mostly oceanic with three islands of land, one such colonizing ship landed successfully. This ship did not carry any humans because of the length of the journey, but humans were ‘grown’ from DNA information stored on the ship. The planet has lost touch with Earth 400 years earlier after the local volcano destroyed their transmitting equipment. The society on Thalassa is very laid back, with a stable culture devoid of politics or religion.
One day a ship appears, Magellan, a ship from Earth, with the last million humans to have left Earth before its destruction. Just before the end humanity has developed a quantum drive making manned interstellar space travel a possibility. The crew of the Magellan is awakened near Thalassa while the other humans aboard are kept cryogenically frozen. They are on their way to Sagan 2, a planet even further from earth where they will terraform a habitable planet for themselves. They stop on Thalassa to repair their ice shield, forcing them to stay on Thalassa and mingle with the people there for at least a year.
The book deals with the consequences of the visit of the last humans to a colony of humans who never even saw Earth except in a recording. Their cultures are very different (the colonists of Thalassa received a censored version of the history and culture of Earth).
The story of the Thalassa people and the last people from Earth is very interesting. There is a clash of cultures, a sense of loss for those from Earth, a debate about the mission of Magellan. In between are many sections that go deeper into the reason for what is or has happened, for example explaining the discovery of the Sun going supernova or of the quantum drive. This is where Clarke gets more scientific than science fiction. It is very interesting to read this (although I have no idea how correct it still is, being published 27 years ago), but it slowed the story down for me. Other than that the story was very interesting, especially reading about how humanity works with the limits physics has given us. Four out of five stars.