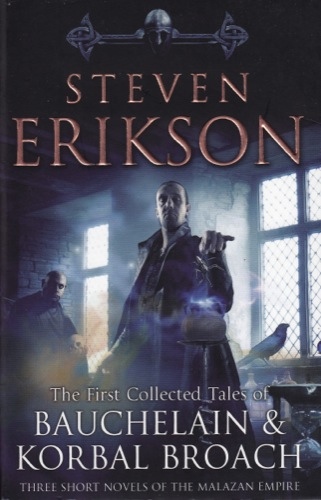 After finishing The Malazan Book of the Fallen I had one Steven Erikson book left in the series, ‘The First Collected Tales of Bauchelain and Korbal Broach’. Bauchelain and Korbal Broach are the two necromancers, accompanied by their manservant Emancipor Reece, who we first met in ‘Memories of Ice’. Because their arrival always coincides with the nightly disappearance of people in the town, they are forced to travel from town to town, from land to land. In this collection there are three novellas (‘Blood Follows’, ‘The Healthy Dead’ and ‘The Lees of Laughter’s End’) that tell the story of how Emancipor Reece came to work for them, their journey over the seas and how they saved a country from a good king.
The stories are nowhere near as dark and serious as those in the main series by Erikson. They are filled with murder, demons, gods, magic, strange creatures and more. And they have a lot more humor. They are a great addition to the series, and for me were four out of five stars.