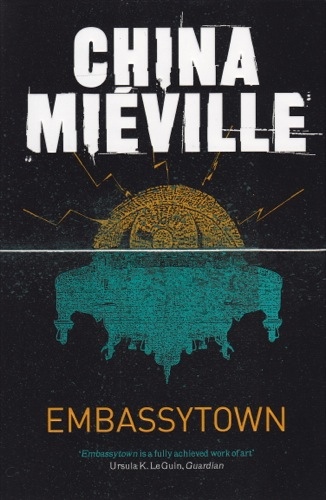 China Miéville is one of those writers whose books I save up, because I know I’m just going to love them, and I want to always have a few left to read. Even though I love his works, it has been two years since I last read one of his works, so it was time to pick up another one.
Embassytown is a town on a distant planet where humans live side by side the original inhabitants of the planet, the Hosts. Even though we can understand and speak their language, they can only understand us if that language is spoken by two ambassadors who are extremely in tune to one another. These ambassadors are taught in Embassytown, which is a colony of the Bremen empire. When a new kind of ambassador arrives from Bremen, everything changes in Embassytown, and Avice is caught in the middle of it.
This novel, while clearly science fiction because of the aliens, other planets, space travel and its setting in the future, is about more than that. It’s also about politics, mainly those of colonialism (Bergen/Embassytown, but also Embassytown/the Hosts). And about communication, and what language is, and can be. That language can be so much more than just words, and that the way language works in a group of beings can influence their very core being. The novel is something special, something I could not put down. It takes a bit of effort to get into it, because Avice is the narrator so some of the language she uses and the settings the story takes place in are unfamiliar. But not so much so that the story is hard to follow. It is another Miéville classic, and a worthy winner of the Locus (and nominee of the Hugo, Nebula, Arthur C. Clarke and Kitschies awards). Five out of five stars.