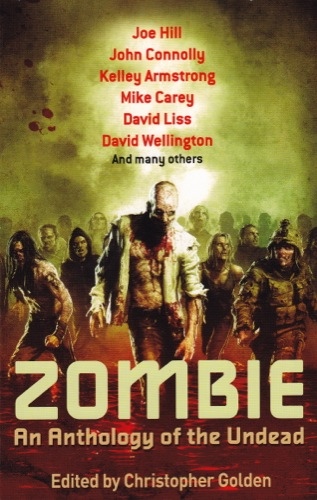 In the big three of popular supernatural creatures at the moment, of vampires, werewolves and zombies, zombies are the weirdest. Just what is so fascinating about the walking (and rotting) dead coming to eat the brains of us living humans? For me it is mostly the apocalyptic world they cause for the living humans, and my curiosity about how humans will survive.
In this collection many writers give their take on a zombie tale, and there are some pretty strong ones. There is a story by John Connolly about Lazarus, resurrected by Jesus, but now in a living-dead state that isn’t that happy. There is a story (by Tim Lebbon) about the last three survivors in a quarantined city. In ‘Life Sentence’ by Kelley Armstrong a rich guy is trying to create a zombie virus so he can live forever. And the best story was by Joe Hill, which was nothing more than the twitter-feed of a girl on a boring road-trip, with a stopover that the world should know about.
All in all a pretty decent zombie collection (although not all tales contain zombies). Four out of five stars.