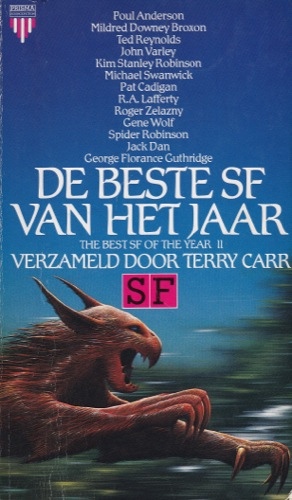 This collection from the early eighties has the work of some great writers, like Roger Zelazny, Gene Wolfe and Kim Stanley Robinson. It’s a very nice collection of short science fiction stories. I especially liked ‘Venice Drowned’ by Kim Stanley Robinson, about Venice some years in the future, now truly sunk beneath the laguna, being plundered by tourists from America and Japan. Another good one was ‘The Saturn Game’ by Poul Anderson (winner of the Hugo and Nebula for best novella), where the crew of a mission to one of Saturn’s moon plays an imaginary game to offer some relief during the journey, but in the end it gets them into trouble when they start confusing the real (dangerous) world with their game. A strong collection of very good stories. Four out of four stars.