The Long War by Stephen Baxter and Terry Pratchett 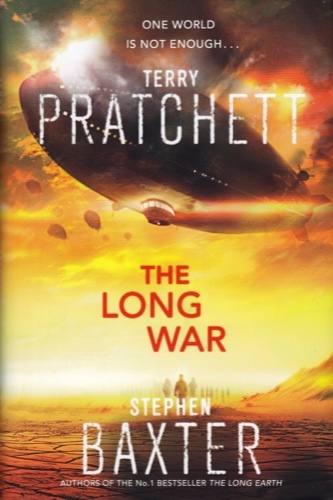 After reading “The Long Earth” earlier this year I couldn’t help myself and picked up its sequel immediately. And it was nearly as much fun as the first book.
It’s some years after the events in “The Long Earth”, with Joshua Valenté married with children living in a settlement in one of the parallel worlds. But on Datum Earth, there is still a government trying to govern over their territories, trying to extract taxes from the settlers there to keep Datum Earth, with all the people who are unable to step themselves, going. Needless to say there is friction between Datum Earth government and the settlers on the step worlds. Add to that that the trolls are disappearing, probably because of the abuse they suffer from humans, who treat them as little more than animals. Joshua can’t help himself when is asked by Sally to help in finding out the true cause (and destination) of the Troll exodus.
Like the first one I really enjoyed this book. I love the world Pratchett and Baxter build of stepwise Earths, each a little different from the one before. I really liked the short mention of the problem us Dutch people have on stepwise earths, because we have won our country from the water, and all our stepwise land is… under water. I loved that there was no all out (physical) war. I was under the impression that there would be only two “Long Earth” books, and was confused by the many set ups for new story lines by the writers. Luckily for me, there will be more “Long Earth” books, and I’ll be sure to pick up “The Long Childhood” in 2014. I give this book four out of five stars.