The Double by José Saramago 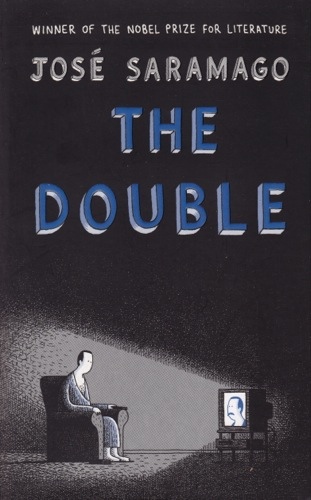 Ever since reading Haruki Murakami’s ‘The Wind-up-Bird Chronicle’ I’ve discovered a love for magical realism as a genre. Books that take place in our world, where small things are just a bit off. Not enough to call it straight up fantasy, but not normal either… Because of this another writer that was recommended to me was José Saramago, a Portuguese writer, probably best known for his novel Blindness.
In this book the main character is Tertuliano, a divorced high school history teacher who is a bit of a loner. One day he gets a tip from a fellow teacher to watch a certain movie. He is shocked when he sees that one of the extras looks almost exactly like him. When he looks up a photo of how he looked when the movie was shot, he finds out that they are identical, down to their facial hair. He gets obsessed with this double, and starts a mission to find out who he is. Eventually he discovers his double, the actor.
It took some getting used to the writing style in this book (It is my first by Saramago, so I have no idea if this is a typical example) but I loved it. The narrator is as much part of the magic of this book as Tertuliano and his double. I love how the narrator keeps commenting both on what is happening in the story and his (the narrator’s) telling of it. The story itself is pretty simple, but the writing style and exploration of the theme of having an exact double make it very good. Four out of five stars, and a good recommendation for someone who loves Murakami.