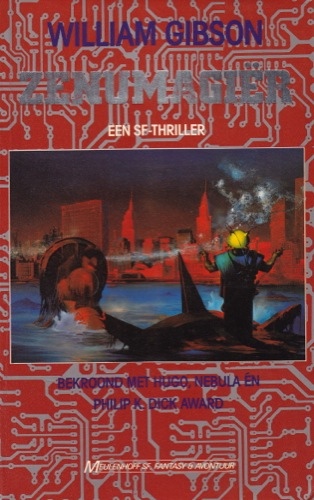 ‘Neuromancer’ by William Gibson is such a classic of science fiction and of cyberpunk, winner of three major awards (Hugo, Nebula and PKD) and nominated for two more (BSFA and Campbell), and on many best-of-lists, that I couldn’t not read this book. It is responsible for making terms like ‘cyberspace’ popular. When you reading it you have to remember that when the book was published (in 1984) the Internet as we know it did not yet exist. ‘Neuromancer’ was so far ahead of the situation at the day, that there is even a discussion if the Internet as we know it is based on the book or if the book foresaw what was already happening.
I found the story itself confusing. As a reader you are dropped into this future world where people can be jacked into cyberspace. The main character, Case, was a talented computer hacker, until he was caught stealing and the part of his central nervous system that enables him to get access to cyberspace was destroyed by a mycotoxin. He gets recruited/kidnapped/saved from his life in the underworld of Chiba City in Japan by Molly, who works for Armitage. Armitage pays to cure Case on the condition he completes a mission for him. While on the mission Molly and Case also look into Armitage’s background, and slowly they get drawn into a strange conspiracy of sorts, with huge companies, important families and advanced AI’s.
I feel that while reviewing this book, on the one hand I have to look at it in the time it came out, and how new and creative it was back then. On the other hand, I am reading it now. I often felt confused by the story, it felt like Gibson did not explain enough of the back-story of the world this novel is set in. The ideas are good (although overly familiar to a reader of this time) and I can see they were original. But the story itself was just too confusing at times, leading me to still give it three out of five stars.