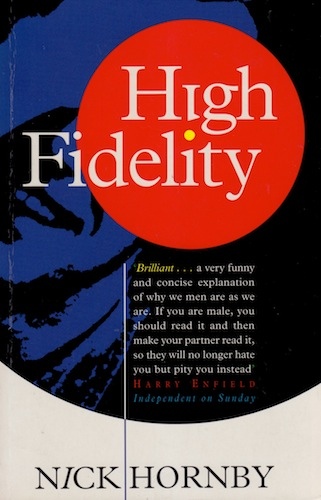 When I had just met my now husband, we saw one of his favorite movies together, one I had never heard of. It was High Fidelty, with John Cusack and Jack Black. When I saw the book by Nick Hornby, I couldn’t help but pick it up, partly because I have enjoyed a Nick Hornby work (“A Long Way Down”) before, and partly because I am still convinced that ‘the book is better than the movie’.
It is written from the point of view of Rob, a thirty-something owner of a failing record store in London. He tells us about his life after his last breakup. He is obsessed with music, collections and lists. He isn’t that likeable, a bit of a loser, and still you keep reading what will happen next because somehow it is also recognizable.
From what I remember from the movie, the movie and book are pretty similar, and it is hard to say which one is better. I’d still choose the book, but I’m not a movie person and I like how the book can give me more insight into Rob’s mind. A highly enjoyable book, with lots of lists thrown in. Four out of five stars.