Dust of Dreams by Steven Erikson 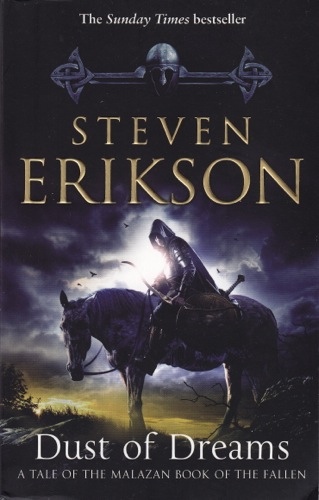 Book nine, and the second-to-last book in the humongous (in page count and story lines) series by Steven Erikson, The Malazan Book of the Fallen. The book is most definitely part of the series, not stand alone. It is also a two-parter with the last book of the series, “The Crippled God”.
We’re mainly on the continent where Lether is. Adjunct Tavore is taking her Bonehunters to Kolanse to… to fight a war, but with whom? Slowly everything is coming together, and with a huge cliff hanger, we are ready for the last installment.
Like with the other books, if you liked them, you’ll probably like this one. It has gods, scheming, war, other creatures, and many story lines. I liked it, and can’t wait to start part 10, the grand finale. Four out of five stars.