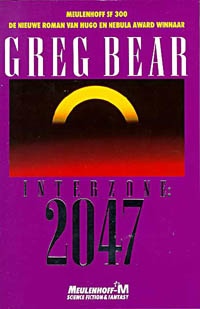 Greg Bear is one of my favorite writers and while I have a few of his works, I try just to read them now and then so I know I will always have a few new ones waiting for me. This time I picked up “Queen of Angels”.
It is 2047 and the world is basically separated into therapied and untherapied. The therapied people get the better jobs, the untherapied people seem to be freer in their thinking. A third class of people is the high naturals, those of such mental make up that they don’t need therapy. In this society where almost everyone is therapied, the crime that writer Emmanuel Goldsmith commits of premeditated murder is a huge shock. We follow this crime in three ways. One is through the eyes of Richard Fettle, another poet and a friend of Goldsmith. Another is through Mary Choy, a police officer on the case who is desperate to find Goldsmith. Lastly we Martin Burke, a disgraced psychotherapist who has discovered a way to enter a persons “Country of the Mind”. In between we also learn about a space probe with an AI on board who is slowly growing towards a discovery and self-awareness.
There is a lot going on in this book. Not only in the many story lines, but also with bigger ideas about crime, therapy, self-awareness. Because of this I had difficulty getting into the book. I felt I never really understood just what exactly was going on, or what the meaning was of what I was reading. But still, I wouldn’t say the book was bad. The ideas and the future Bear pictures for us are very interesting and I am curious how this version of the future is developed or used in the other books in the series. I give it three out of five stars.