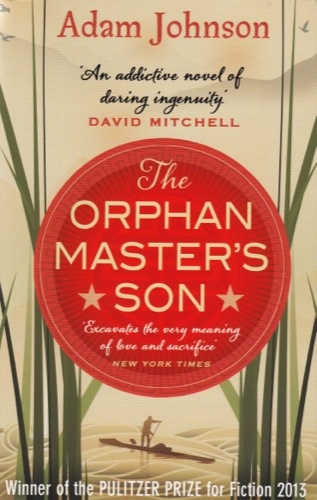 Because I am generally a science fiction reader, with some excursions to fantasy and horror, I rely on lists and the LibraryThing boards for recommendations in general fiction. After several friends on the LT boards recommended “The Orphan Master’s Son”, I picked it up, and I am glad I did.
This is a story told in two parts. In part one, we read about the life of Jun Do, an orphan in North Korea. He leads a varied life, as part of a delegation the US, as a kidnapper of Japanese citizens (in Japan), as a radioman on board a fishing boat. It ends with him being captured and sent to a prison mine. In the second part we follow Commander Ga, who is ‘replaced’ by Jun Do. Jun Do takes over his life, including his house, his wife, his kids and his job. Because of the warped state of affairs in North Korea, everyone accepts this (more or less). When an American delegation travels to North Korea Commander Ga/Jun Do is asked by Kim Jung Il to prepare for their visit. He tries to use this visit to execute a desperate plan for him and his family, and for all of North Korea.
I find it hard to review this book, because in part, the strength of this book relies on how much of this could be true. The descriptions of North Korea, such as of the blind, elderly parents of the interrogator who can’t even express their true feeling to each other in private, are gripping and surreal. Is this how it really is in North Korea, or is this our Western, partly biased, view? I’m not saying that I think everything is good and nice in North Korea, I’m just saying that we are so ‘against’ North Korea and we see so little of what is really going on, I don’t know if this is really how the normal people in North Korea live. If I accept that all that is described in the book could really happen or has happened to North Koreans, it is such a sad and tragic story. It is very powerful, and I think it helps to bring home the daily, small and big, horrors under the regime in North Korea. Four out of five stars.